Venco Business Solutions, located in Bland, VA., sells and services ATM’s, on-premise music, messaging on hold, and 3M drive-thru intercom to the Restaurant Industry including Fast Food and Convenience Stores along with other professional environments, nation-wide. This bustling business partnered with us the day we opened for business, entrusting us to provide technical support to a growing number of users and manage the company's networking equipment, servers, and computers.  Nearing the end of its useful service life cycle, Venco knew it was time to replace their existing server infrastructure to reduce the risk of hardware/systems failure, and scale out its networking to accommodate for the planned expansion of offices within the facilities. 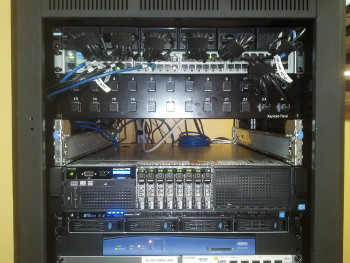 For most companies who outsource their IT, projects such as this are delivered at additional expense because a lot of service providers see this type of work as an opportunity to gain high-margin revenue, saying they're unable to cover IT Projects within their managed services agreement.  If you're anything like us, you'd agree that's a poor way of trying to build long-lasting relationships with your partnered customers. You see, we believe in mutually beneficial relationships, which is why we understand that our TSSA customers are more like partners, rather than just paying customers, expecting to receive the same fiduciary responsibility from us, as if we were in-house staffers, working within their own internal IT department.

As part of Venco's Flat-Fee Service Agreement, this project was completely covered within the scope of their agreement, meaning all labor was delivered without any additional cost. We replaced Venco's Dell PowerEdge R510, running a single physical workload, with a powerful 2-processor 12th generation Dell PowerEdge R720, running 3 virtualized server workloads. The server phase was actually the first stage of a two stage build-out, where stage one was to migrate the existing workload to a modern platform and address the over-utilization of physical server resources through virtualization, where dedicated resources would be allocated to multiple virtual workloads. Stage two, of the server phase, was earmarked for a later date, pending selection of service management software.

The networking phase concentrated on scaling the network to the newly constructed offices and introduce layer 2 management and additional security constructs into the topology. We replaced the existing 3com unmanaged switch with a fully managed HP Aruba series 2530-48G and, with support from the existing Dell SonicWALL TZ 215, created routed vlans for infrastructure, management, customer service, technicians, diagnostics, and guests, all scrutinized by the UTM. We also added an additional HP Aruba 2530-24G, to service the technician vlan, and a Dell PowerConnect 2824 web-managed layer 2 switch, to service the diagnostic vlan, both installed in a fully enclosed wall-mounted cabinet in the warehouse.

From start-to-finish, the on-site project time spanned 3 days, without downtime or disruption of service. Along with the hardware upgrades, we also migrated Venco's Microsoft Small Business Server infrastructure from 2008 to 2011, created two additional Windows Server instances, migrated their QuickBooks server and Symantec Endpoint Protection Manager to new virtual workloads, implemented iSCSI block storage, and integrated a remote backup regime that included ability to failover to the remote location, in the event of catastrophe.